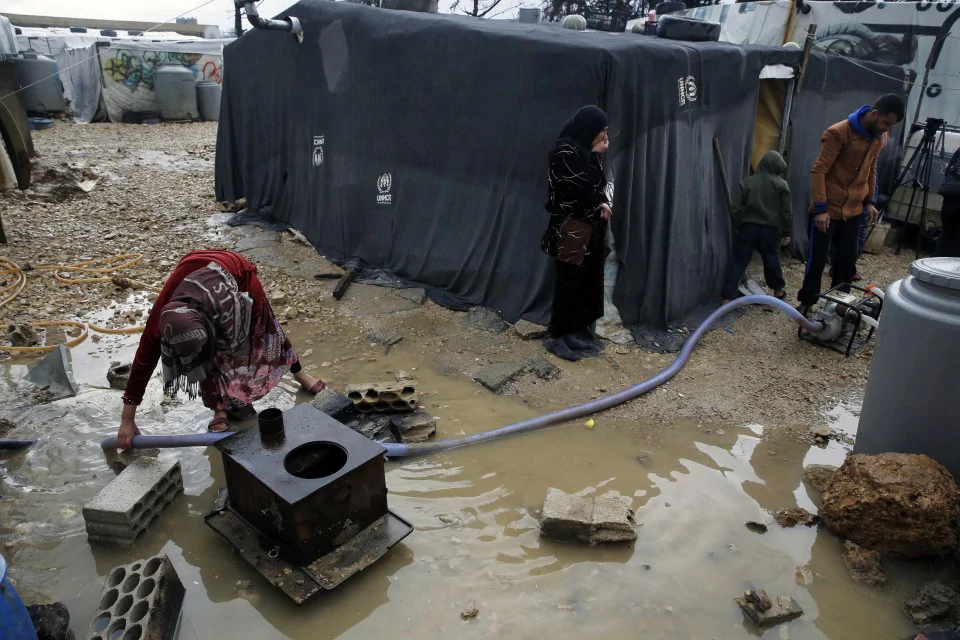 A Syrian family pumps water after heavy rain at a refugee camp in the town of Bar Elias in Lebanon's Bekaa Valley. (Bilal Hussein/AP)
Conflict

In July, a Russian strategy was introduced to facilitate the return of more than 1.7 million refugees to Syria, where 6.2 million people remain internally displaced. The United Nations projects the return of 250,000 refugees this year. Increasingly anti-refugee policies in western states and the reduction of Syrian refugees resettled annually from 2016 to 2018 have placed significant financial and domestic political pressures on host countries in the region. As a result, heightened domestic fears in Lebanon, Jordan and Turkey of permanent integration are coinciding with a reported increase in deportations since 2017.

With resettlement increasingly less possible and the domestic instability surrounding fears of naturalization, the regional and global push for the return of Syrian refugees is underway. In most instances, however, it is premature. Refugees are at risk of forced return to Syria because of shifting norms in refugee policymaking. How did this come about?

The U.N. Refugee Agency (UNHCR) has three primary “durable solutions” for refugees — resettlement, integration and voluntary repatriation (return). In 2016, the first option, resettlement, came under attack amid waves of Syrian asylum seekers and refugees fleeing toward Europe. Rather than accepting refugees, many western states closed their doors and looked to neighboring countries — Lebanon, Turkey and Jordan — already hosting significant refugee populations to stem the outflows.

The protracted displacement of as many as 1.5 million Syrian refugees in Lebanon and upward of 1.4 million in Jordan have intensified domestic concerns about political and socioeconomic issues in both countries. Host to more than 3.6 million Syrians refugees, Turkey has a greater size and economic capacity, but the general public responded with backlash to 55,000 Syrian refugees obtaining citizenship.

The politics of return rates

With the door on resettlement and naturalization closing, return is becoming a priority for host states. But UNHCR and host states seem to be painting different narratives about both the manner of and justification for returns, with host states consistently reporting higher totals of returning refugees. Moreover, Russia’s Center for Reconciliation for Syria announced that about 130,000 Syrians returned last year — putting its estimated total at 315,000 since the beginning of the war. Meanwhile, the United Nations reported that it has verified about 103,000 refugees who have returned to Syria since 2015.

While refugee return rates are inevitably difficult to monitor, host states may be more inclined to report higher totals to emphasize that return is plausible. Higher totals would also signal to other Syrian refugees that return is safe because thousands of others have gone home before them. Or, refugee returns are occurring more widely than the UNHCR is able to monitor and verify, bringing into question whether non-UNHCR-monitored returns were carried out in accordance with international law.

Lacking the capacity to sustain protracted hosting, and enticed by Russian and Syrian government-organized avenues of return, states in the region are likely to hasten efforts to reduce their refugee populations. Indeed, Lebanon is the first. Changes on the ground have enabled Russia and Syria to push a narrative of stability and reception for refugees in protracted displacement abroad. The war has slowed in many areas with the return of government control to many formerly contested territories — most notably in the southwest — and undoubtedly, thousands are returning. But, for a large population of Syrian refugees, the fear of going home is not only predicated on the threat of renewed instability, but also fear of the Syrian government. Jordan, for example, hosts hundreds of thousands of Syrians who fled largely from regime-held areas. Many have evaded military service to protect their families. Others participated with the opposition as activists, journalists, monitors, fighters and so on; or a member of their family did.

Beyond fears of government retaliation, much of Syria’s infrastructure and housing is in rubble. Returning Syrians are finding cities and towns in ruin, riddled with unexploded mines. For others seeking to return, restitution of personal property and assets remain in question as recent legal changes in Syria creates uncertainty over refugees’ claims to their property — that is, if they even have the appropriate identification papers to prove ownership, given that many left personal documents behind when they fled.

Successful repatriation depends on a number of factors. First, the choice to return to one’s country of origin should be voluntary. Second, conditions for a safe and sustainable return must be present in the country of origin. Third, the UNHCR, its partnering organs, the host country where refugees sought refuge and the country of origin must have the capacity to ensure that repatriation can be organized in a voluntary, safe, sustainable and dignified manner. The key actor, UNHCR, serves as the effectual manager, providing oversight and facilitating repatriation. Any efforts to repatriate refugees bilaterally or outside the umbrella of UNHCR raise red flags because the fundamental international legal premise on which repatriation occurs cannot be ensured, monitored or enforced. Legitimate concerns from UNHCR and humanitarian monitors over the “voluntary” nature of many returns in 2018 cast doubt on whether the timing or viability of any legitimate refugee return plan is realistic. The increasing trend of returning might force the UNHCR to intervene or even increase collaboration with state actors to reduce the inherent risks.

Jesse Marks is an MPhil candidate in International Relations and Politics at the University of Cambridge, and a former Fulbright visiting fellow at the Center for Strategic Studies in Jordan and a Scoville fellow at the Stimson Center.