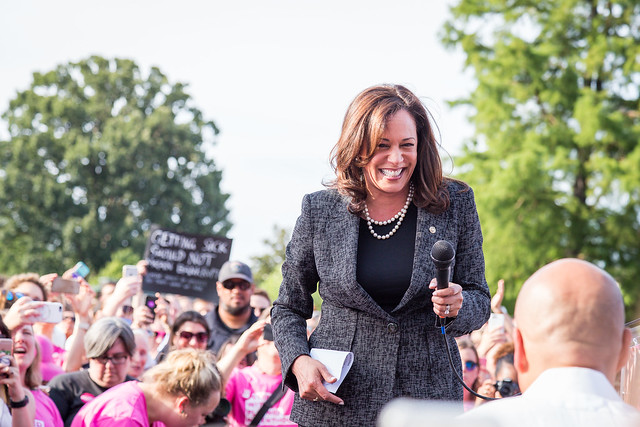 "Linking Together: March to Save Our Care" Rally at the U.S. Capitol on June 28, 2017. Democratic Party Leaders and others spoke to defend the Affordable Care Act and to defeat Republican Party efforts to repeal so called "Obama Care" and replace it with "Trump Care" alternatives.
2020 Presidential Election

Black candidates know they have to be careful in talking about race. Here’s what the research suggests.


The 2020 Democratic presidential primaries will have the most diverse field of top-tier candidates in American history. Earlier this month, Cory Booker joined Kamala D. Harris as the second black Democratic senator to announce a candidacy for the White House. Some speculate that they may be joined by other prominent black candidates, such as former attorney general Eric H. Holder Jr.

Each of these candidates has a credible shot at the nomination, considering both the growing importance of the black vote in the Democratic primaries and the party’s interest in advancing diversity in government. How they address race in their campaigns may matter more for these candidates than for their white competitors, given that the news media tend to focus disproportionately on how black politicians address race in their campaigns.

Until recently, social scientists suggested that African American candidates should refrain from making racial appeals. Those who argue for a deracialized campaign strategy believe that black candidates can only succeed by refraining from both overt and subtle appeals to blacks in order to attract the support of white voters. Barack Obama, for instance, effectively used the deracialized strategy in his historic 2008 presidential campaign; others have done so as too.

But U.S. racial politics have changed dramatically since 2008, including the rise of the tea party movement, the Black Lives Matter movement, Donald Trump’s 2016 presidential campaign and growing racial polarization. White liberals have become more willing to accept — or even embrace — candidates who speak about racial inequities; meanwhile, racial and ethnic minorities have begun demanding more action.

So it’s hardly surprising that more politicians are making explicit appeals to racial and ethnic minorities. In particular, Harris and Booker have been more vocal about racial issues than their black predecessors. That shift could improve their ability to mobilize and shore up support from racial progressives.

But they’ll have to be careful about how they frame those appeals.

In my book, “Bringing Race Back In: Black Politicians, Deracialization, and Voting Behavior in the Age of Obama,” I show that not all racial appeals are equal. I argue that black candidates can improve their electoral standing by making positive racial appeals — outreach that either advances black policy interests or highlights the candidate’s connection to the black community — without attacking others. For instance, they could support criminal justice reform, reach out to black leaders, or campaign in predominantly black areas.

Just as important, voters may be turned off by negative racial appeals, in which candidates say that someone else is racist, or that they themselves are being treated unfairly because of race.

How I did my research

So which is most effective for black candidates: a deracialized approach, a negative racial approach, or a positive racial approach? To find out, I coded the contents from a random sample of newspaper articles for each black Senate and gubernatorial candidate who campaigned for statewide office from 1982 to 2010. In total, the data set includes more than 2,000 newspaper articles with coverage of 33 elections with a black gubernatorial or Senate candidate who faced a nonblack candidate.

Interestingly, both black and white voters were substantially less likely to support black candidates who charged racism or otherwise made negative racial appeals — both in primaries and in general elections. While my data collection ends in 2010, there may still be some more recent evidence of this in the criticism that Florida gubernatorial candidate Andrew Gillum (D) received for arguing that racists supported his opponent, Ron DeSantis (R).

Black candidates may wish to avoid running as racially neutral

All this suggests that, instead of running as racially neutral, black candidates would do best to make positive racial appeals — visiting black churches, highlighting memberships in black organizations, putting forward a racially progressive agenda that touches on criminal justice reform or similar policies.

These actions would encourage black voters to believe the candidate cares about their lives, while not reducing net white votes. By contrast, claiming that they’re being treated unfairly because of race — either by their opponents or the media — will likely backfire.

Given the growing importance of both black and Latino voters, no Democratic candidate will succeed — either in the primary or in the general election — without building a multiracial coalition. Black Democratic candidates will want to use every tool they can to garner that support for themselves.

Christopher T. Stout is an assistant professor of political science at Oregon State University and author of Bringing Race Back In: Black Politicians, Deracialization, and Voting Behavior in the Age of Obama, (University of Virginia Press, 2015).