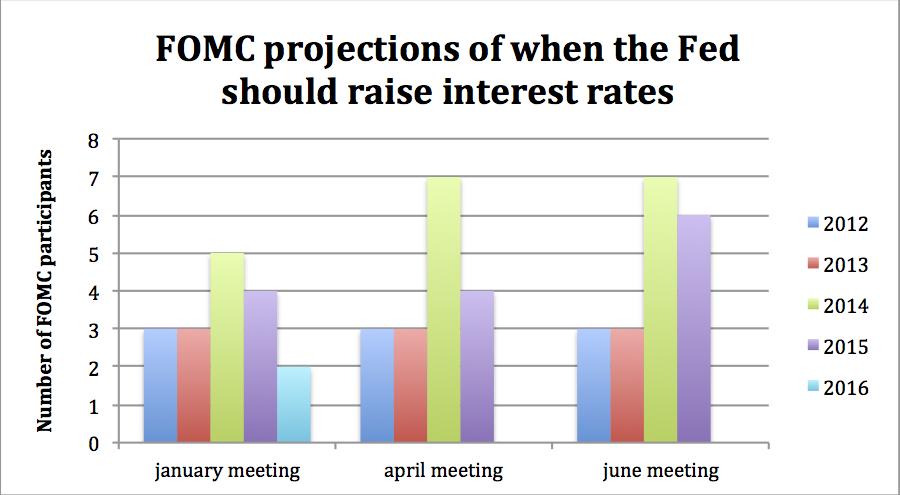 Is Bernanke’s Fed poised to do more for the economy?

Oddly enough, the Federal Reserve’s FOMC and UVA’s Board of Visitors have something in common:  They make decisions in secret, and they don’t explain themselves very well.  Watching Bernanke’s press conference this afternoon at the close of the FOMC’s June meeting, I couldn’t help but wonder how economists could be so sure that more aggressive Fed action is just around the corner.  As one prominent economist tweeted, “I read the Fed as saying: ‘One more bad jobs report, and we’ll do more.’”   But it struck me after watching Bernanke and scanning today’s FOMC’s projections that the barrier to more aggressive easing by the Fed might remain high– even as FOMC participants today downgraded their own forecasts for growth and inflation over the next three years.

So, with the caveat that I’m a political scientist (not an economist or a seasoned Fed watcher) who thinks about the Fed as a political institution, a few thoughts on the Fed and its seemingly timid response to a still ailing economy:

First, thanks to the Fed’s new communication policy, we now have three meetings-worth of FOMC projections, which include the individual views of FOMC members about the appropriate timing for the Fed to start ramping up the federal funds rate.  I’ve arrayed together the January, April, and June projections to give a sense of the incremental shift underway on the FOMC:

The size of the FOMC’s hawkish flank (blue and red bars favoring rate increases in 2012 or 2013) has not changed (nor presumably its makeup).  But the dovish flank of the FOMC (green, purple and teal bars favoring rate increases only in 2014 or later) has grown.  Granted, the FOMC in June was finally at full strength, with two new governors (Stein and Powell) adding their projections to the mix.  We don’t know of course whether Powell and/or Stein joined the 2015 group, or whether one or two of the April 2014 voters changed their views.  Either way, the expanding dovish wing of the FOMC conceptually makes it easier for Bernanke to lead the FOMC to do more at a future meeting.  Still, the internal opposition to further and longer policy easing remains entrenched on the FOMC.  Outnumbered, to be sure, but it’s been outnumbered all year.   Either that flank constrains Bernanke from doing more, or he just isn’t yet convinced that the data warrant a more aggressive policy response.   (If the latter, the size of the dovish wing might not matter.)  Still, neither interpretation suggests that a more assertive Fed is just around the corner– even if Bernanke promised today that “if we don’t see continued improvement in the labor market, we will be prepared to take additional steps if appropriate.”

Second, Bernanke’s promise that the Fed is prepared to do more (“if appropriate”…) in face of a weakening labor market would run the Fed straight into a collision course with the fall presidential campaign.  The next scheduled meeting ends on August 1, followed by mid September and late October meetings.  Bernanke strenuously (and appropriately) insists that the Fed is non-partisan.  But it strikes me as putting the Fed on tenuous ground if it moves aggressively in the run up to a presidential election that will be fought over the state of the economy.  To be sure, acting in that electoral context would show the Fed’s mettle, a signal that it won’t be cowed by partisan critics on the right who would surely object to more asset purchases or other unconventional policies.   But it strikes me as potentially too damaging to the Fed’s reputation if it moved to juice the economy in the run up to an election.   John Cassidy from The New Yorker argued today that the Fed is “destined to become an important player in the election, and quite possibly a lightning rod.”   Perhaps true, but the Fed’s credibility relies on its reputation for independence– which would be challenged all over again if it adopts aggressive easing policies this summer or fall. That said, the six month extension of Operation Twist conveniently runs out after the election– perhaps allowing the Fed to dodge partisan critics until after the electoral dust has settled.